Sunday sermon 24 march – Unlike any other king

What an interesting name – Palm Sunday! Some have suggested PARADE SUNDAY! For good reason – Palms are not even mentioned in the account in Luke. Cloaks are – people lay them on the ground. It’s festive. Crowds shout out!

Today people are not that sure about what it means – hence the  Palm Sundae picture above!

So what’s the most important thing today?

Kids love animals – so donkeys have featured on Palm Sunday services. There are some serious logistical problems about that when you have donkeys in church!

Palms are good – they are mentioned in three accounts! Not in our Luke reading though! Cloaks are also laid down.

Praise is good! Psalm 118 is quoted – a processional Psalm welcoming  the one who comes “in the name of the Lord”.

Stones are referred to. People write whole sermons on the stones

Either way they work up to Easter!

So for the sake of the Donkey watch this creative take on Palm Sunday:

Good questions! I loved the donkey’s ability to resist stopping at the burger king!

THE BEST NAME FOR THE EVENT IS THE TRIUMPHAL ENTRY

The name “Triumphal” entry is deceptive – it underscores the challenge of who wins in this story – of who has the real power.

Crowds cheer – in Luke disciples are praising Jesus.  “Deeds of power” or miracles are the reason given for this celebration! His miracles and healings have impressed people. One has to ask – are people still looking for the wrong things (like the food he provided when he fed the 5000?).

The words “Blessed is he who comes” in Psalm 118 – which welcomed pilgrims – become in Luke’s account here: “Blessed is the King who comes…”. Jesus is more than a pilgrim here. He is a humble King fulfilling the prophecies of one riding in like this, on the colt of a donkey (Zechariah 9:9-10). On the other hand Pilate – when he came in to town – would have been on a horse – with soldiers – showing his power as a warning to the masses! Jesus is on a humble donkey’s foal.

One way or other JESUS PLANNED HIS OWN PARADE! He tells them where to go to get the foal. He has no problem with them putting him on it. And the parade begins! The disciples cry “Peace in heaven!” which is fascinating as at his birth the angels sang “peace on earth”! Why is the glory here in the highest heaven? There’s an old song we sing sometimes: “You are the king of glory” which includes the line “glory in the highest heaven – for Jesus the Messiah reigns”.

The focus is on heaven probably because this is not an earthly king or an earthly Kingdom! At an earthly level, from a human political point of view, they kill him! The real power is the power of the Kingdom – seen in the mighty deeds – which were healings and exorcisms mainly, restoring people’s bodies and minds! The real power will be seen on Easter Sunday – when he is raised from death.

What kind of king is this? Triumphant? – not really on the day. Certainly not on Good Friday. Definitely victorious on the third day when he is raised.The route he takes to his victory is profoundly challenging. Read Isaiah 53 to get a sense of what he went through as the suffering servant.

He is prince of peace – but his parade is not on a horse and has no soldiers. In fact Luke seems to de-politicise it by not referring to Palms  and not even using the word “Hosanna” – they both had political connotations.

What kind of King do you want? (I’m referring to you today as you read this).  Someone powerful who will vindicate your cause and change your circumstances, like those who wanted him to overthrow the oppressive regime of the Romans?

In the Easter events the efforts of Judas (to force Jesus’ hand?) and the violence of Peter when Jesus is arrested (drawing his sword and attacking someone) speak of the human ways of achieving power.

We get Jesus of Nazareth – someone so different – “Unlike every other bloke” – and we are to become like Him! Strength in weakness and humility are his way of dealing with his enemies.

A King unlike any other! 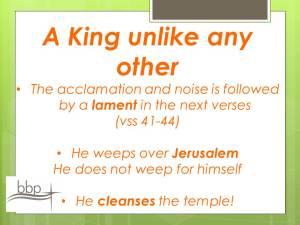 This King – Jesus of Nazareth – laments over the city.  Read beyond the verses set for today and you will see this.

He does not weep for Himself, even though he knows he faces a certain death. He laments the fact that they miss out again on the opportunity that God gives them to find true peace.

He cleanses the temple! The real issue is not the political power, but the hearts of the people of God who had taken a wrong turn! He stops first at the religious establishment and tries to get them to refocus. Perhaps today he would do the same.

What is God’s word for us today in the light of these events?

There is something about Palm Sunday that warns us about offering Hosannas without counting the cost of the Jesus’ way! It’s easy to deride those same crowds who within a few days would be shouting “crucify”! But would we have been any different? Are we any different?

On that day the Pharisees tried to silence the praise. Jesus’ response to the Pharisees is profound:  We read in Luke 19:38-39 ‘…  saying, “Blessed is the king who comes in the name of the Lord! Peace in heaven, and glory in the highest heaven!” Some of the Pharisees in the crowd said to him, “Teacher, order your disciples to stop.”  He answered, “I tell you, if these were silent, the stones would shout out.”  (v40).

What was happening had consequences for the whole of creation.

Jesus was content to be declared King on that day. We as Christians should still be declaring him King today.

He rides into Jerusalem courageously. We have to be courageous too as we own him as King in our lives.

That is God’s challenge for us today!

The issue is Jesus is King! We have to say it! Declare it! The early Christians did (rather than Caesar is King) and died for their faith!

Say Jesus is King today and they will try to shut you down! To silence you like the Pharisees on that Palm Sunday.  It’s the most challenging generation in which to really follow Jesus, put him first, and SAY blessed is the King!

Here is something to consider today: Where are the most difficult place for US to declare Jesus as King (and live it out?). Here are some of them I have thought of. You can add your own:

Who will shut us down there? Who will say “you need to really top talking about this Jesus bloke. It’s not PC you know!” or words to that effect.

So as we end, we go back to our first outline.

What is the main thing today? Donkeys? Palms? Praises? Stones? Working up to Easter? People regard this Sunday as the “official” start of Holy week – which it is! We are however actually still in Lent – the last Sunday of self – reflection or introspection… the period of those “How am I doing” questions.

How am I doing when it comes to declaring Jesus as King in my life? Am I happy to shout “Hosanna” on Sunday and then be silent on Monday and the rest of the week?

Or am I a secret Christian? Self-appointed underground for God – just too deep underground?

Are we brave and courageous like Jesus on that Palm Sunday?  Are we courageous enough to declare ourselves to be followers of Jesus in our lives each day? Or have we worked it all out so that we can remain silent?

May you find grace and strength to make Him Lord of every day. May this Holy week be a time when you discover that you have a story to tell about this Jesus who was “unlike every other bloke”and whose kingship changes our lives today.